Adam Schefter reports that the Saints receive a conditional 2018 sixth-round pick from the Cardinals for RB Adrian Peterson.

The Arizona Cardinals officially announced that they’ve acquired RB Adrian Peterson from the Saints for an undisclosed 2018 draft pick.

“We are always on the lookout for opportunities to improve our team and we look at this as one of those opportunities,” General Manager Steve Keim said in a statement. “What Adrian has accomplished in this league is well-established. Our need for a spark in our running game right now is also obvious and we are excited to give him the chance to provide that.”

Dianna Russini of ESPN reports that the Saints have traded Adrian Peterson to the Arizona Cardinals for a conditional pick.

“I’m so ecstatic,” Peterson told Stacey Dales of NFL Media of the trade to Arizona.

Over the weekend, Schefter reported that multiple teams thought the Saints could make Peterson available for trade ahead of the upcoming deadline (NFLTR) and it looks like they found a trade partner in the Arizona.

It quickly became clear that the Saints were better off moving forward with Mark Ingram and Kamara as the focus of their rushing attack, as opposed to trying to find carries for Peterson, so this move makes plenty of sense for both parties.

The Cardinals’ rushing attack has been very disappointing since they lost David Johnson for the season, but Peterson should at least give them more a diversified attack to go along with Andre Ellington and Kerwynn Williams.

Peterson, 32, is a former first-round pick of the Vikings back in 2007. After 10 seasons in Minnesota, Peterson signed a two-year, $7 million contract with the Saints and stands to make base salaries of $1 million and $1.05 million over the next two years.

According to OverTheCap.com, trading Peterson will free up $3.5 million of available cap space while creating $1.25 million in dead money.

Joel Corry mentions that the Saints will carry a $1.25M cap charge in 2018 from Peterson’s $2.5M signing bonus.

In 2017, Peterson has appeared in four games and rushed for 81 yards on 27 carries (3 YPC) to go along with two receptions for four yards receiving and no touchdowns. 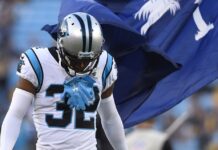 163,465FansLike
7,623FollowersFollow
244,259FollowersFollow
© NFLTradeRumors.co is an independent news source and has no affiliation with the National Football League (NFL), NFL.com, or any team(s).
wpDiscuz