The Cleveland Browns officially signed nine players to futures contracts for the 2019 season on Tuesday.

Pipkins, 24, wound up signing on with the Packers as an undrafted free agent out of Oklahoma State back in 2017. The Packers traded him to the Colts for LB Antonio Morrison during the preseason and he was on and off of their roster before eventually being claimed by the Lions.

Pipkins would later sign on to the Browns’ practice squad in November shortly after being waived by Detroit.

In 2018, Pipkins appeared in three games and recorded 10 tackles and no interceptions.

Browns OL Greg Robinson Had 157 Lbs Of Marijuana At Time Of Arrest, Facing Up To 20 Years In Prison 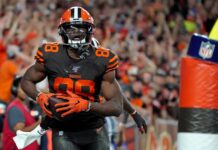 169,594FansLike
7,623FollowersFollow
249,318FollowersFollow
© NFLTradeRumors.co is an independent news source and has no affiliation with the National Football League (NFL), NFL.com, or any team(s).
wpDiscuz