The Cleveland Browns announced the signing of OL Erle Ladson on Tuesday, as well as the release of DB Micah Pellerin, who was placed on waivers.

Ladson, 23, originally signed on with the Raiders as an undrafted free agent out of Delaware back in May of last year.

However, he was among the team’s final roster cuts at the beginning of the regular season.

Pellerin, 26, originally signed on with the Colts as an undrafted free agent out of Hampton back in 2012. He lasted just a month with the team before he was waived.

Since them, Pellerin has had brief stops with the Packers, Cowboys and Titans before signing a future/reserve contract with the Browns this past January. 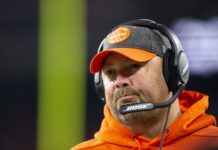 150,221FansLike
7,623FollowersFollow
228,401FollowersFollow
© NFLTradeRumors.co is an independent news source and has no affiliation with the National Football League (NFL), NFL.com, or any team(s).
wpDiscuz