Lanier, 25, wound up signing on with the Redskins as an undrafted free agent out of Alabama A&M back in 2016. He was waived with an injury designation coming out of the preseason and he later reverted to the team’s injured reserve list.

Washington waived Lanier from injured reserve with an injury settlement and he eventually signed on to the Chargers’ practice squad last month.

In 2017, Lanie appeared in 11 games and recorded 14 tackles, five sacks, a forced fumble, a recovery and six pass defenses. 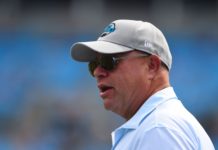 Jets Sign TE Ryan Griffin To Three-Year Extension Worth Up To $10.8M

149,920FansLike
7,623FollowersFollow
228,059FollowersFollow
© NFLTradeRumors.co is an independent news source and has no affiliation with the National Football League (NFL), NFL.com, or any team(s).
wpDiscuz