According to Brian Costello, the Jets tried out free agents OT Jah Reid and RB Juwan Thompson on Tuesday.

Reid, 29, is a former third-round pick of the Ravens back in 2011. He spent four years in Baltimore before joining the Chiefs in 2015.

Reid was in the third year of his four-year, $10.95 million that included $4 million guaranteed and set to make a base salary of $2.25 million for the 2017 season when the Chiefs released him last week in a move that freed up $2,787,500 of available cap space.

In 2016, Reid appeared in 12 games for the Chiefs and played 101 total snaps, according to Pro Football Focus. 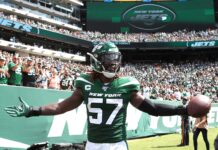 149,964FansLike
7,623FollowersFollow
228,098FollowersFollow
© NFLTradeRumors.co is an independent news source and has no affiliation with the National Football League (NFL), NFL.com, or any team(s).
wpDiscuz