The Minnesota Vikings have begun the process of trimming their roster down to 75 players. Here’s the full list of roster cuts up to this point:

Sullivan, 31, Is a former sixth-round pick of the Vikings back in 2008. He has two years remaining on his six-year, $25.6 million contract that included $10 million guaranteed and stands to make a base salary of $5.5 million over the next two years.

Sullivan missed all of 2015, due to multiple back surgeries.

In 2014, Sullivan appeared in all 16 games for the Vikings. Pro Football Focus had him rated as the No. 12 center out of qualifying players.

Leonhardt, 25, wound up signing on with the Oakland Raiders as an undrafted free agent out of Bemidji State back in 2013. He was unable to make the team’s 53-man roster coming out of the preseason that year, but later signed on to the team’s practice squad.

The Raiders elected to sign him to a one-year exclusive rights contract last April, but Leonhardt was once again among their final roster cuts at the start of the season. After a brief stint with the 49ers, Leonhardt signed a one-year deal with the Vikings back in March.

In 2015, Leonhardt appear in four games and caught a single pass for four yards receiving.

Sorensen, 28, is a former seventh-round pick of the Chargers back in 2013. He was waived at the start of the 2014 season and later signed by the Titans to their practice squad.

However, Sorensen lasted less than a week in Tennessee before later returning to the Chargers at the end of the 2014 season. After spending some time with the Chargers, Sorensen signed a contract with the Vikings a few weeks ago.

Sorensen has yet to appear in an NFL game.

Plummer, 23, originally signed with the Redskins as an undrafted free agent out of UCF in May of last year. He was one and off of the Redskins’ practice squad before the Vikings later added him to their taxi squad in October.

Minnesota elected to bring Plummer back on a future/reserve contract in January. They cut him loose a few days after this year’s NFL draft before re-signing him close to a month ago.

In 2015, Plummer appeared in three games and recorded a single tackle. 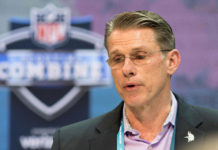