According to Ian Rapoport, the Titans are signing former Saints S Kenny Vaccaro to a contract on Saturday.

The Titans have already confirmed the news and announced the signing of DB Jason Thompson.

Rapoport says that interest in Vaccaro around the league picked up in recent days and the Titans felt they had to make a move now.

Tennessee brought in a number of safeties for visits this week after they lose S Johnathan Cyprien for the season.

Vaccaro, 27, is a former first-round pick of the Saints back in 2013. He was in the final year of his four-year, $9.425 million contract when the Saints elected to pick up his fifth-year option last year that will pay him $5.676 million for the 2017 season.

Vaccaro is testing the open market as an unrestricted free agent this offseason.

In 2017, Vaccaro appeared in 12 games for the Saint and recorded 60 tackles, 1.5 sacks, three interceptions, a fumble recovery returned for a touchdown and seven pass defenses. Pro Football Focus has him rated as the No. 88 safety out of 88 qualifying players. 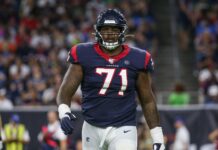 149,933FansLike
7,623FollowersFollow
228,148FollowersFollow
© NFLTradeRumors.co is an independent news source and has no affiliation with the National Football League (NFL), NFL.com, or any team(s).
wpDiscuz