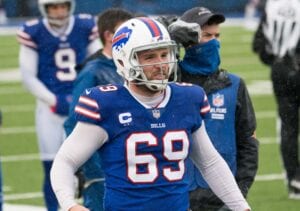 Stevenson will be eligible to return from IR after the first three weeks of the season.

Ferguson, 27, wound up signing on with the Bills as an undrafted free agent out of LSU back in 2016. He was waived at the start of the regular season and later re-signed to the team’s practice squad.

Buffalo brought Ferguson back on a futures contract the following year and he was in line to be an exclusive rights free agent in 2019 when the Bills signed him to a three-year deal.

He was entering the final year of his contract in 2021 when the Bills signed him to another three-year extension.