According to Adam Schefter, the Commanders and WR Terry McLaurin have reached an agreement on a three-year extension worth up to $71 million. 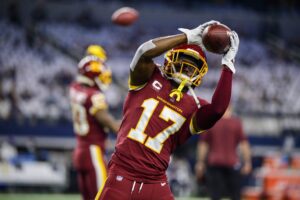 Schefter adds the deal includes a record $28 million signing bonus. At just under $24 million a year in new money average, it puts McLaurin in the top five among all receivers.

We’ve seen other teams trade their star wideouts rather than fork over that much money this offseason. But Commanders HC Ron Rivera was adamant the team wasn’t trading McLaurin, and unlike other teams who have said similar things about players it appears Washington meant it.

McLaurin was set to become an unrestricted free agent in 2023.