Adam Schefter reports that the Rams have reached an agreement with WR Cooper Kupp on a three-year extension worth $110 million over the five years of the agreement. 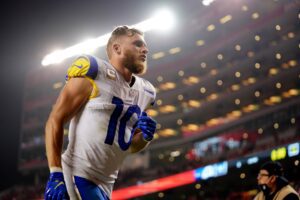 Kupp’s three-year extension is worth $80 million with $75 million guaranteed.

Kupp makes $25 million per year in new money and a five-year average of $22 million. He’s under contract through the 2026 season.

Reports had said that the two parties were closing in on an extension and a deal could be done as soon as tonight that would leave Kupp among the highest-paid receivers in the NFL.