According to Rick Stroud, the Buccaneers are unofficially optimistic that TE Rob Gronkowski will re-sign with the team sometime before training camp. 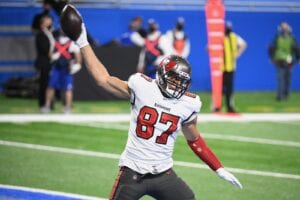 Gronkowski won’t be with the team for minicamp this week and Stroud says the official line is he hasn’t decided about playing in 2022.

However, Stroud adds there are signs pointing to Gronkowski coming back. Tampa Bay hasn’t added a veteran tight end and has taken pains to maintain as much cap space as possible. Gronkowski has also worked out with QB Tom Brady this offseason.

If Gronkowski does play, he’s said it would only be in Tampa Bay.

“The Buccaneers situation is just too good if I decide to go back and play,” Gronkowski said, via SB Nation’s Debbie Emery. “Like I said, I love all my teammates there. They are all great teammates and all selfless players, they are there for the team and what’s best for the team and the whole organization. If I do play football again, it’ll be for the Bucs.”

Gronk was also asked if he had any contract negotiations with Tampa Bay.

“That will start if I decide that I want to play,” Gronkowski said. “There’s no reason to do that while there’s a decision to be made first. It’s all about if I decide to.”

Gronkowski, 33, is a former second-round pick of the Patriots back in 2010. He was in the sixth year of his eight-year, $55.23 million contract that included $13.17 million guaranteed when he made the decision to retire in 2019.

The Buccaneers later acquired Gronkowski in a trade with the Patriots in 2020. He returned to the Bucs on a one-year, $10 million contract last year.

In 2021, Gronkowski appeared in 12 games for the Buccaneers and caught 55 passes for 802 yards receiving and six touchdowns.

Rob Gronkowski Says He Is Retiring