According to Aaron Wilson, the Texans are signing C Jimmy Morrissey off of the Raiders’ practice squad to their active roster. 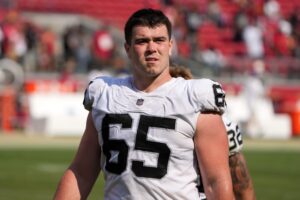 Morrissey, 23, was a seventh-round pick by the Raiders in the 2021 NFL Draft out of Pittsburgh. He signed to a four-year, $3.6 million rookie contract but was among their final roster cuts coming out of the preseason and re-signed to Las Vegas’ practice squad.

During his college career, Morrissey appeared in 47 games with 46 at center and one at right guard. He earned third-team All-ACC honors in 2018, first-team honors in 2019, and second-team in 2020.