The Kansas City Chiefs are re-signing veteran QB Matt Moore to their practice squad on Sunday, according to Herbie Teope. 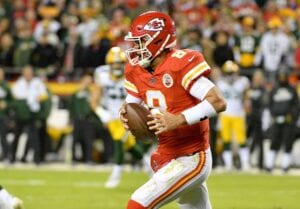 Moore, 36, originally signed on with the Panthers as an undrafted free agent out of Oregon State back in 2007. He spent three years in Carolina before signing on with the Dolphins in 2011.

Moore played out the final year of a two-year, $3.5 million contract with the Dolphins in 2017 and did not play in 2018. He finished a one-year deal with the Chiefs before returning to the team in July.

However, Moore was released on Saturday.

In 2019, Moore appeared in six games for the Chiefs and recorded 59 completions on 91 pass attempts (64.8  percent) for 659 yards, four touchdowns, and no interceptions.