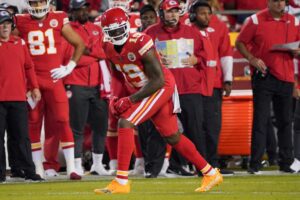 The Chiefs signed him to a contract in October before waiving him on Monday.