Colts GM Chris Ballard shut down any speculation about Indianapolis being a landing spot for free agent WR Julio Jones. 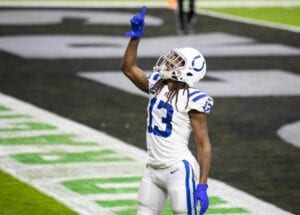 The former Falcon and Titan would reunite with QB Matt Ryan if he signed with the Colts but Ballard shut down any speculation: “Those reports are wrong.”

However, Ballard did add veteran WR T.Y. Hilton is still potentially in the mix to come back, depending on how the Colts’ receiving corps looks during camp.

There are also reportedly a couple of other teams interested in signing Hilton.

Hilton was testing the open market as an unrestricted free agent in 2021 when he re-signed with the Colts on a one-year deal worth up to $10 million.

He was placed on injured reserve due to an upper back/neck injury coming out of the preseason, but was able to return later in the season.

In 2021, Hilton appeared in nine games for the Colts and caught 23 of 37 targets for 331 yards receiving and three touchdowns.

We have Jones and Hilton listed in our Top Available 2022 NFL Free Agents list.