According to Aaron Wilson, the Commanders are signing CB De’Vante Bausby to the roster. 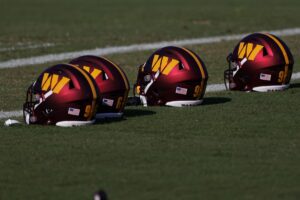 Bausby has played for a number of teams but most recently was in the USFL as a member of the New Jersey Generals.

Bausby, 29, originally signed on with the Chiefs as an undrafted free agent out of Pittsburgh State back in May of 2015. He lasted just over a month in Kansas City before he was waived and later signed to the Bears’ practice squad.

Bausby signed on with the Chiefs in 2017 but was cut loose at the start of the regular season. The Eagles signed him to their practice squad and he was on and off of their roster in 2018.

The Broncos signed Bausby to a one-year contract in 2019 and re-signed him to another one-year deal in 2020. He was released coming out of training camp before later being re-signed and promoted off their practice squad.

Denver released Bausby midseason and he signed on with the Cardinals soon after. He had a stint with the Raiders last offseason but was cut again coming out of camp. He landed with the Patriots’ practice squad for a portion of the 2021 season. During the spring, he played for the New Jersey Generals in the USFL.

In 2020, Bausby appeared in 11 games for the Broncos and Cardinals and recorded 21 total tackles games, no interceptions and five passes defended.