Ian Rapoport reports there are contending teams who are continuing to monitor WR Odell Beckham Jr. for a potential signing. 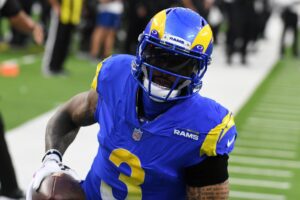 He adds the Buccaneers had some level of interest before they decided to sign WR Julio Jones. The Packers have also stayed in touch and of course the Rams, per Rapoport.

However, Rapoport says with Beckham’s rehab for a torn ACL suffered in the Super Bowl expected to stretch into the second half of the season, there’s a strong chance Beckham waits until he’s cleared or close to cleared to sign.

That would give him a chance to survey the lay of the land and make sure he lands in a good situation. It also would be similar to how last season played out when he joined the Rams following the trade deadline after being cut by the Browns.

Beckham tweeted earlier this offseason he wanted to stay in Los Angeles but money was an issue.

They kno whwre I wanna be 😂😂 just can’t play for free !