Manish Mehta reports that the Cowboys are signing former Jets DE Tarell Basham to a two-year, $6.5 million contract on Thursday. 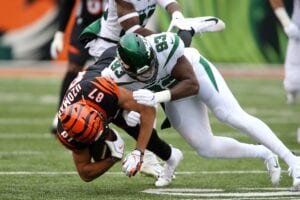 Basham, 26, is a former third-round pick of the Colts back in 2017. He was waived a year later and claimed off waivers by the Jets.

In 2020, Basham appeared in all 16 games for the Jets and recorded 35 tackles, 3.5 sacks, three forced fumbles and a pass defense.