Free-agent WR Robert Foster‘s agent, SportsTrust Advisors, announced that their client is signing with the Dolphins. 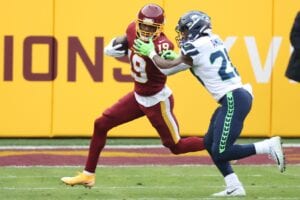 Foster, 25, signed on with the Bills as an undrafted free agent out of Alabama back in 2018. He agreed to a three-year, $1.51 million contract with the Bills, but was waived and later re-signed to their practice squad.

Buffalo promoted Foster to their active roster soon after and he managed to make the 53-man unit in 2019. He re-signed as an exclusive rights free agent last offseason but was released coming out of the preseason.

The Packers signed him to their practice squad but was claimed by Washington back in October.

In 2020, Foster appeared in four games and recorded two receptions for 37 yards, (18.5 YPC) and no touchdowns.