According to Doug Kyed, the Jets are re-signing veteran QB Joe Flacco to a contract on Wednesday. 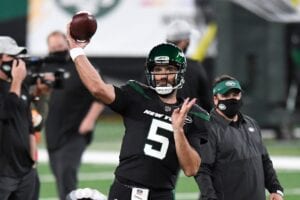 Schefter adds that Flacco is receiving a one-year, $3.5 million deal plus incentives.

Flacco, 37, is a former first-round pick of the Ravens back in 2008. The Broncos agreed to trade a 2019 fourth-round pick to the Ravens for Flacco.

He signed a one-year contract worth $1.5 million worth up to $4.5 million with the Jets in 2020 before joining the Eagles last offseason. Philadelphia traded him to the Jets ahead of the deadline for a conditional sixth-round pick.

In 2021, Flacco appeared in two games for the Jets and completed 64.3 percent of his passes for 338 yards, three touchdowns and no interceptions.