DJ Bien-Aime reports that the Jets are signing DE John Franklin-Myers to a four-year contract extension. 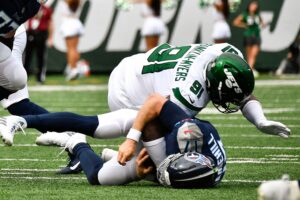 According to Brad Spielberger, Franklin-Myers is signing a four-year, $55 million extension that includes $30 million in total guarantees.

Franklin-Myers, 25, is a former fourth-round pick of the Rams back in 2018 out of Stephen F. Austin. The Rams waived him coming out of the preseason and he was later claimed off of waivers by the Jets.

Franklin-Myers was in the final year of his four-year, $2.9 million contract prior to signing an extension.

In 2021, Franklin-Myers has appeared in four games for the Jets, recording seven tackles, three sacks, and a forced fumble.

We will have more details on the contract extension as they become available.