Tom Pelissero of NFL Media reports that the Jets are signing veteran LB B.J. Goodson to a one-year contract worth up to $2.1 million. 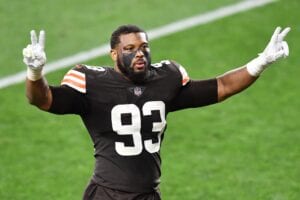 Goodson was among a large group of players who tried out for the Jets on Tuesday.

Goodson, 28, is a former fourth-round pick of the Giants back in 2016. He was entering the final year of his four-year, $2.92 million rookie contract when New York traded him to the Packers in exchange for a conditional 2020 7th-rd pick.

In 2020, Goodson appeared in all 14 games for the Browns and recorded 91 tackles, a half sack, two interceptions, a fumble recovery and six passes defended.