Adam Schefter reports that the Jets are signing RB Tevin Coleman to a one-year deal worth up to $2 million.

Ian Rapoport reports that the Jets are finalizing a contract to sign veteran RB Tevin Coleman on Wednesday. 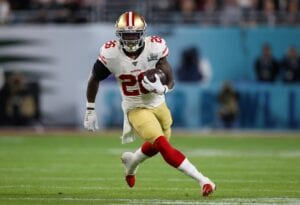 This reunites Jets’ new HC Robert Saleh and Coleman after playing under him with the 49ers.

He was placed on injured reserve last season and activated in October. He was testing the market as an unrestricted free agent.