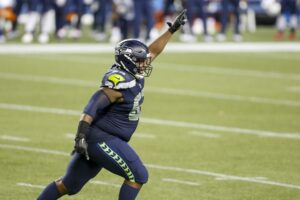 Avery, 25, went undrafted out of Southeast Missouri back in 2020 before signing on with the Seahawks.

Unfortunately, Avery was unable to make the 53-man roster heading into the seasons and was let go by Seattle.

During his two years with Southeast Missouri, Avery recorded 41 tackles and two and a half sacks.