Ian Rapoport of NFL Media reports that the Panthers are signing edge rusher Haason Reddick to a contract on Wednesday. 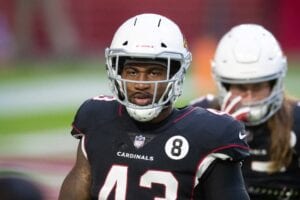 Adam Schefter reports that Reddick’s one-year contract is worth up to $8 million.

Reddick was one of the best available pass rushers are this point in free agency. He gets the opportunity to reunite with Matt Rhule, who coached him at Temple.

Reddick, 26, is a former first-round pick of the Cardinals back in 2017. He’s entering the final year of his four-year, $13.47 million fully guaranteed contract when the Cardinals opted to decline his fifth-year option last year worth $10,089,000 for the 2021 season.

Reddick was testing the open market as an unrestricted free agent for the first time in his NFL career.

In 2020, Reddick appeared in all 16 games for the Cardinals and recorded 62 tackles, 12.5 sacks, six forced fumbles and four passes defended.