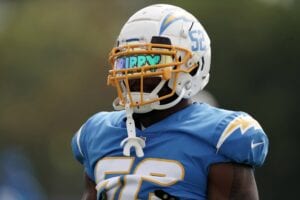 Perryman, 28, is a former second-round pick of the Chargers back in 2015. He played out the final year of his four-year, $4.776 million contract before returning to the Chargers on a two-year, $12 million deal in 2019.

Perryman later agreed to a restructured contract that paid him up to $6,487,500 for the 2020 season. He’ll be an unrestricted free agent this offseason.

In 2020, Perryman appeared in 13 games for the Chargers and recorded 48 tackles, one sack, a forced fumble and a pass defense.