According to Jeff Howe, the Patriots are bringing back C Ted Karras after a year away with the Dolphins. 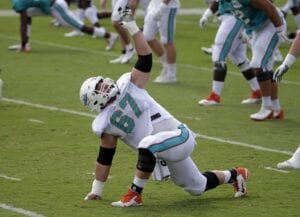 Howe says it’s a one-year, $4 million deal for Karras. This move also likely means New England has resigned itself to not bringing back C David Andrews.

Karras, 28, is a former sixth-round pick of the Patriots back in 2016. He signed a four-year deal with the Patriots, but was waived at the start of the 2017 season and later signed to their practice squad.

New England later added him to their practice squad and he finished out his contract in 2019. He signed a one-year, $4 million deal with the Dolphins after testing the open market as an unrestricted free agent for the first time in his NFL career.

In 2020, Karras started all 16 games for the Dolphins at center. Pro Football Focus has him rated as the No. 17 center out of 36 qualifying players.