Ian Rapoport of NFL Media reports that the Ravens are bringing back DT Michael Pierce on a three-year, $16.5 million contract. 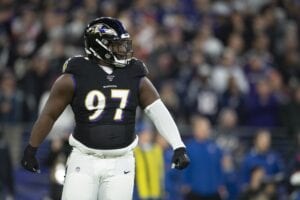 This is actually the second former player the Ravens have “attempted” to sign after Za’Darius Smith backed out of his deal with Baltimore.

It’s worth mentioning that signing him to a contract won’t impact a team’s 2023 compensatory picks, given that he was released this offseason.

Pierce, 29, wound up signing on with the Ravens as an undrafted free agent out of Samford in 2016. He played out the final year of his three-year rookie contract before returning to the Ravens on a second-round restricted tender.

He was testing the open market as an unrestricted free agent for the first time in his career when he signed a three-year, $27 million deal with the Vikings in 2020.

Pierce was slated to make a $3 million, fully-guaranteed base salary in 2020 before opting out due to the pandemic. That total was tolled to 2021.

The Vikings released him a few days ago.

In 2021, Pierce appeared in eight games and recorded 20 tackles, three sacks, and a forced fumble.