The Baltimore Ravens are signing WR Andy Isabella to their practice squad on Wednesday, according to Aaron Wilson. 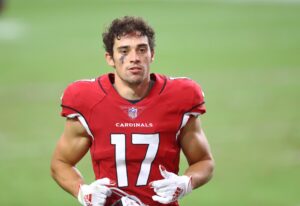 Isabella officially cleared waivers earlier in the day after the Cardinals opted to move on. He had been a popular trade candidate in recent years but a deal never came together in the end.

Isabella, 25, is a former second-round pick by the Cardinals in the 2019 NFL Draft out of UMass. He was in the fourth year of his four-year, $4,629,876 rookie contract that included a $1,387,176 signing bonus when the Cardinals decided to waive him yesterday.

For his career, Isabella has appeared in 36 games for the Cardinals over three seasons and caught 31 of 48 targets for 426 yards (13.7 YPC) and three touchdowns.