According to Tom Pelissero, the Vikings have renegotiated LT Riley Reiff‘s deal to give him a $1 million signing bonus. 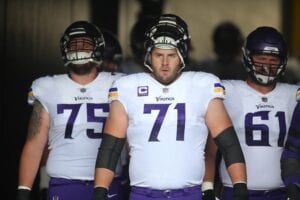 This makes up for a $1 million playing time incentive that Reiff missed by less than 1 percent of the snaps after missing Week 17 in the COVID-19 protocols.

Pelissero adds Minnesota still has a decision to make on whether Reiff will be back in 2021, as he’s a potential cap casualty and has a $5 million roster bonus due on March 19.

But at the very least this should help the two sides leave on better terms, should that end up happening, given Minnesota forced Reiff into a pay cut before the season started.