According to Field Yates, the Bills have restructured WR Stefon Diggs‘ contract. 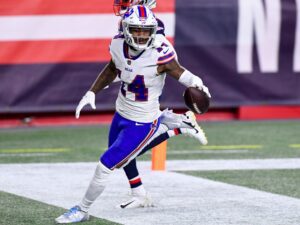 Buffalo converted the maximum $11.718 million of Diggs’ salary into a signing bonus to spread over the remainder of his deal, creating $7.8 million in additional 2021 cap space, per Yates.

The Bills had a little over $3 million in cap space before the move, so this is a hefty addition.

Diggs, 27, is a former fifth-round pick of the Vikings back in 2015. He was in the final year of his rookie contract when he agreed to a five-year extension worth $72 million with the Vikings in 2018.

The Vikings traded Diggs to the Bills in 2020 for a package of draft picks including a first-round selection.