Field Yates of ESPN reports that the Browns have claimed CB M.J. Stewart off of waivers from the Buccaneers on Saturday. 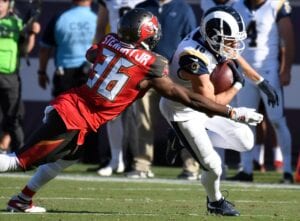 Tampa Bay drafted Stewart in 2018 but he wasn’t able to find a role with the team in his first two seasons.

In 2019, Stewart appeared in 10 games for the Buccaneers and recorded 35 total tackles, no sacks, no interceptions and two pass defenses.