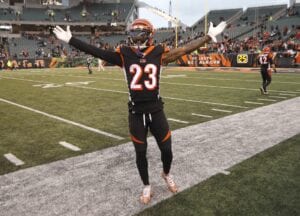 Arizona had signed a number of cornerbacks in the past week including Webb, Dre Kirkpatrick and Ken Crowley after losing Robert Alford for the season.

Webb, 30, is a former fourth-round pick of the Cowboys back in 2013. He lasted just over a year in Dallas before he was waived and later claimed by the Steelers.

Since then, Webb played for multiple teams including the Titans, Saints, Bears, Browns, and Giants before the Bengals signed him to a three-year contract in 2019.

Cincinnati elected to cut him loose back in March with two years left on his deal. Arizona signed him to a contract last week.

In 2019, Webb appeared in 15 games for the Bengals and recorded 37 tackles, an interception, and seven pass defenses.