Adam Schefter of ESPN reports that free agent G Larry Warford has opted out of the 2020 season, despite having multiple offers on the table. 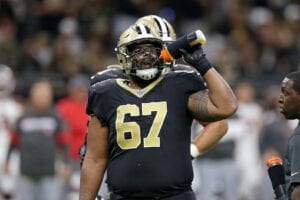 Schefter says that Warford is looking to start a family and will continue to train and revisit playing in 2021.

Reports had said that Warford was looking to make close to the $7 million salary he was scheduled to earn from the Saints before his release a few months ago.

The Texans and Bears were linked to Warford shortly after his release, but there wasn’t a lot of recent buzz about him signing with either.

Warford, 28, is a former third-round pick of the Lions back in 2013. He played out his rookie contract with Detroit before signing a four-year, $34 million deal that included $17 million guaranteed back in 2017.

In 2019, Warford appeared in 15 games for the Saints, making 15 starts for them at right guard. Pro Football Focus has him rated as the No. 8 guard out of 81 qualifying players.