The NFL announced Tuesday that former Raiders HC John Madden passed away at the age of 85. 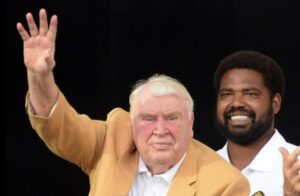 “On behalf of the entire NFL family, we extend our condolences to Virginia, Mike, Joe and their families,” said NFL Commissioner Roger Goodell. “We all know him as the Hall of Fame coach of the Oakland Raiders and broadcaster who worked for every major network, but more than anything, he was a devoted husband, father and grandfather.

“Nobody loved football more than Coach. He was football. He was an incredible sounding board to me and so many others. There will never be another John Madden, and we will forever be indebted to him for all he did to make football and the NFL what it is today.”

Madden was drafted by the Eagles in the 21st round during the 1958 draft. He suffered a knee injury that ended his career and led to him pursuing a coaching career.

Madden spent fours years at Allan Hancock College before being hired as the defensive coordinator at San Diego State.

The Raiders later hired Madden as their LBs coach in 1967 and eventually promoted him to head coach for the 1969 season.

Madden was inducted into the Pro Football Hall of Fame in 2006.

Madden’s career extended beyond the game, as he was a broadcaster for CBS, FOX, ABC and NBC for 30 years. The popular “Madden NFL” video game became the most popular sports game of all time.

Our heartfelt condolences go out to his family, friends, and colleagues on the passing of an NFL legend.