Tom Pelissero of NFL Media reports that the NFL is removing Seahawks CB Quinton Dunbar from the commissioner’s exempt list on Saturday. 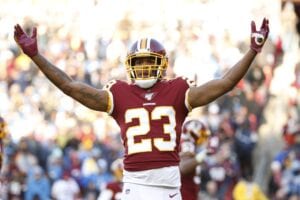 Dunbar is expected to rejoin the Seahawks as soon as Monday.

This comes a day after the news that Broward prosecutors declined to charge Dunbar due to “insufficient evidence.” Giants CB Deandre Baker, however, has been charged with four counts of robbery with a firearm for his role in the offseason incident.

Both players were officially placed on the exempt list a few weeks ago.

It’s worth mentioning that Dunbar could still face discipline from the NFL for his role in the incident, even though no charges were filed against him.

Dunbar, 27, originally signed on with the Redskins as an undrafted free agent out of Florida back in 2015. He was waived at the start of the 2015 season and was later added to the Redskins’ practice squad before being promoted a few weeks later.

Washingon re-signed Dunbar to a three-year, $10.5 million extension through the 2020 season in January of last year. The Redskins later traded him to the Seahawks for a fifth-round pick this past March.

In 2019, Dunbar appeared in 11 games and recorded 37 total tackles, one tackle for loss, four interceptions and eight pass defenses. Pro Football Focus had him rated as the No. 2 overall cornerback out of 113 qualifying players.