Steelers president Art Rooney II tells Ed Bouchette of The Athletic that they open to signing QB Ben Roethlisberger beyond the 2021 season. 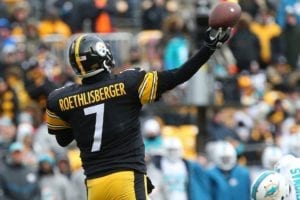 “Obviously after the season we’ll evaluate his contract situation along with other contract decisions we have to make,’’ Rooney said. “But if Ben feels like playing longer and it looks like he’s capable of doing it, certainly that would be a great scenario.”

Roethlisberger has been working his way back from a season-ending elbow injury, but has looked good in training camp to the point where they’re excited to see what he’ll be able to do this year.

“We’re excited what we see from Ben so far in this training camp,’’ Rooney said. “We’re looking forward to what he can do this season. Certainly, his arm strength looks to be as good as it’s ever been. That’s a good sign.”

Roethlisberger, 38, is a former first-round pick of the Steelers back in 2004. He finalized a three-year, $68 million contract last offseason that included a $37.5 million signing bonus.

In 2019, Roethlisberger appeared in two games and completed 56.5 percent of his passes for 351 yards, no touchdowns and one interception.

We’ll have more regarding Roethlisberger as the news is available.

186,524FansLike
7,623FollowersFollow
276,017FollowersFollow
© NFLTradeRumors.co is an independent news source and has no affiliation with the National Football League (NFL), NFL.com, or any team(s).
wpDiscuz