Bengals’ first-round S Dax Hill has played in a limited amount of snaps so far this season. DC Lou Anarumo explained that the rookie will get more playing time when he feels the time is right.

“D-linemen rotate as everyone knows. Linebackers can rotate. I have been doing this for 30 years and I have never rotated a corner and a safety in my life. And I never will. The starters are the starters for a reason. There’s usually good reason. That kid will get in when I feel it is the right time, the right place, in the right role, in the right game…The communication, high-level pass-offs during a play when these guys are communicating, these younger guys have no idea what that is all about until they can slowly and surely get into it,” said Anarumo, via Paul Dehner Jr.

“He fits in really well,” Belichick said, via Zack Cox of NESN. “He was coming back from the knee injury, so he was just a little behind those guys getting out on the field. Dugg, AP, Dev — obviously, those guys have played together for a couple years, so he’s integrated really well with those guys. I think those help him just in terms of their experience and kind of helping him get to the right spots. But it’s hard to not notice his energy, his excitement, his love for football, how passionate he is out there on the field.”

Belichick is confident that Peppers will continue to improve with more time on the field.

“I’m really happy to have him on the team and have him out there, and I think it’s only going to get better going forward if he stays on the trajectory he’s been on,” Belichick said. “It’s been really good, and I was happy to see him out there making some plays.” 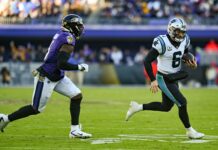