The Denver Broncos have activated QB Jeff Driskel and practice squad DL Darius Kilgo from the COVID-19 list on Wednesday, according to Mike Klis. 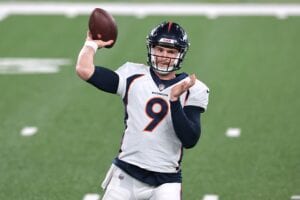 Other roster moves from the Broncos include:

Cincinnati placed Driskel on injured reserve coming out of the preseason last year and he signed on with the Lions. From there, the Broncos signed Driskel to a two-year contract this past March.

In 2020, Driskel has appeared in three games for the Broncos and completed 54.7 percent for 432 yards, three touchdowns and two interceptions. He has also rushed for 28 yards.