According to Lisa Huriash and Chris Perkins, Browns DT Malik McDowell was arrested Monday and charged with public exposure, resisting arrest and battery of a police officer. 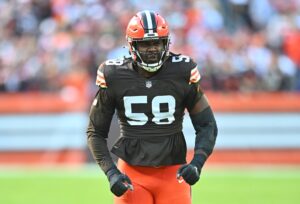 A deputy in Deerfield Beach, Florida, claims McDowell charged at him “full speed” with a “closed fist.” The report indicates the deputy was left “dazed.”

Police were responding to a call about a naked man walking near a school when they found McDowell. After the confrontation with police, the report indicates McDowell fled. He’s scheduled to appear in court Tuesday.

McDowell has had numerous run-ins with the law in a turbulent career that seemed like it had been put back on the rails after he signed with the Browns this offseason and made the team.

The Browns released the following statement:

Statement from #Browns spokesperson on DT Malik McDowell, who was reportedly arrested in Florida: pic.twitter.com/h8id1JNLJg

McDowell, 25, was selected with the No. 35 overall pick by the Seahawks in 2017 NFL Draft. He signed a four-year, $6.95 million rookie contract that included $4.91 million guaranteed.

McDowell was involved in a serious ATV accident back in 2017 and suffered a serious concussion and facial injuries. Seattle waived him with a non-football injury designation in July of 2018 and he was officially cut loose in 2019.

McDowell worked out for the Dolphins last year and had a tryout with the Cowboys before that. He signed on with the Browns after the 2021 NFL Draft and managed to make the team coming out of the preseason.

In 2021, McDowell appeared in 15 games for the Browns and recorded 33 total tackles, three sacks, a fumble recovery and one pass deflection. Pro Football Focus had him rated as the No. 104 interior defender out of 125 qualifying players.