The Dallas Morning News reports that Cowboys free safety Damontae Kazee was arrested early Tuesday morning in a Dallas suburb and charged with driving while under the influence. 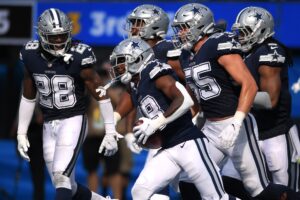 According to the report, Kazee was pulled over for a traffic violation and police reported noticing physical signs that he had been drinking. Kazee told the officer he had consumed alcohol and he later failed a field sobriety test before being detained.

Kazee has been charged with a DWI, which is a Class B misdemeanor for a first offense.

Kazee posted a $2,500 bond Tuesday and was released from jail.

In 2021, Kazee has appeared in six games for the Cowboys and recorded 17 tackles, one interception, a forced fumble and three pass deflections.