According to Field Yates of ESPN, the Dallas Cowboys have signed seventh-round pick DE Ben Gardner to a four-year contract.

Gardner was a three-year starter for Stanford in their 3-4 defensive scheme. Last year, he made the 2013 All Pac-12 Conference First Team Defense. He totaled 106 tackles, 34 tackles for a loss, 17.5 sacks and three forced fumbles over the course of his college career.

The Cowboys clearly deep as much depth as they can find, so he should have as good of a chance to make their final roster as he would have had with any other NFL team. 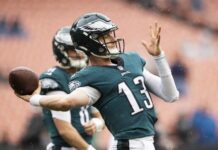