Per the NFL transactions wire, the Miami Dolphins signed CB Quincy Wilson to a futures deal on Wednesday. 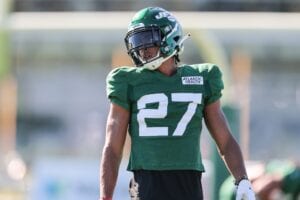 Wilson, 25, is a former second-round pick by the Colts back in 2017. After three seasons in Indianapolis, the Colts traded him to the Jets this past April for a sixth-round pick.

Wilson was in the final year of his four-year rookie contract and set to make a base salary of $1,251,310 for the 2020 season when New York cut him loose.

He caught on with the Giants’ practice squad in November of 2020 and bounced on and off their practice squad until being waived with an injury settlement in December.

In 2020, Wilson appeared in three games for the Jets and recorded one total tackle and no interceptions.