The Atlanta Falcons are bringing in free agent LB Sean Weatherspoon for a visit on Friday, according to Jay Adams.

In 2015, Weatherspoon appeared in 14 games for the Cardinals and recorded 11 tackles. 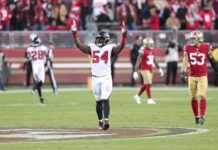