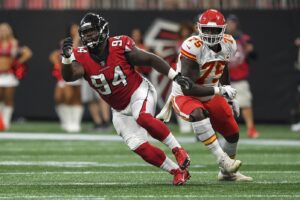 Senat will revert to the Falcons’ injured reserve list should he pass through waivers unclaimed on Monday.

The Falcons placed Senat on the active/PUP list at the start of training camp.

In 2020, Senat was limited to appearing in five games for the Falcons and recording four tackles, no sacks and a fumble recovery.