Adam Schefter reports that Broncos GM John Elway will be taking an elevated role with the team with Denver hiring a GM and giving them final say on personnel. 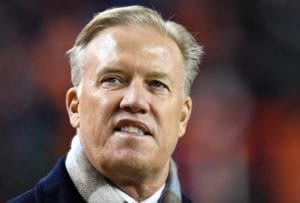 According to Schefter, Elway will stay on as president of football operations while the new GM work closely with Broncos HC Vic Fangio.

Schefter adds that Elway’s top lieutenant Matt Russell had a chance to interview for the GM job and stay on with the team, but he has decided to retire and spend time with family and kids.

The Broncos have already confirmed the news.

Here’s a statement from Elway:

“Working in this role for the last 10 years and going back to my playing days, I’ve always tried to do everything I can to help the Broncos win and get better,” Elway said Monday. “As part of a transition I’ve thought about for a long time, I have made the decision to step up into an elevated role and hire a general manager to lead our personnel and football staff.

“While I’ll continue to be President of Football Operations in 2021, the GM will have final say on the draft, free agency and our roster. This person will be empowered to make all football decisions, working in partnership with Vic.

“I will be there to support our GM and Vic, providing my perspective, helping with the big decisions and being a sounding board whenever needed. With all that goes into the day-to-day responsibilities of a GM and how the job has grown, this structure will set us up for success and allow me to focus on the big picture.

“This is a great place with all the resources to win. We have a lot of good people on the football side, and I’ll be there for them in any way possible.

“The relationship between the GM and Head Coach is very important — Vic is going to be involved in this hiring process. We’ll cast a wide net, and I will start the search immediately with input from Vic and Joe [Ellis].

“I’m excited to begin this chapter and find the next general manager of the Denver Broncos.”

Elway, 60, spent his entire career with the Broncos as their quarterback and won two Super Bowl Championships before retiring on top. He later returned to the team in 2011 as their director of player personnel and was promoted to executive VP of football operations/GM just a year later.

In his nine years with the team, Elway has led the Broncos to a record of 90-70 (56.25 percent), which includes five playoff appearances, two trips to the Super Bowl and a title in 2015.