According to Tom Pelissero, the NFLPA plans to have a new executive director in place no later than 2025. 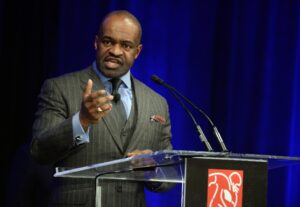 They have already started the search process to find a successor to current director DeMaurice Smith, who was narrowly elected to a final term last October.

A length wasn’t specified at the time, but Pelissero says a timeline is now in place. Smith could also step aside earlier and remain in an advisory role in as little as a year if the search goes well.

Right now the search committee has just begun and is in the information-gathering process, per Pelissero. The selection committee includes president J.C. Tretter, 10 other current and former players on the executive committee and three team representatives with the most years of service.

They will identify two to four candidates to be recommended for the job and then an election will be held among the 32 team representatives. A candidate must win the majority of the votes.

The latest CBA runs through March of 2031, and re-negotiating that will be the top task for whoever the union hires next.

Smith, 58, was elected as director of the NFLPA in March of 2009. Since then, he has overseen negotiations for two collective bargaining agreements between the union and the NFL, including in 2011 and 2020.