The Carolina Panthers officially designated DB Myles Hartsfield to return from injured reserve on Friday, according to Tom Pelissero. 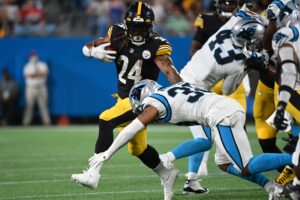 This opens a three-week window of time for the Panthers to activate him from injured reserve and add him to their 53-man roster.

Hartsfield, 24, wound up going undrafted out of Ole Miss back in 2020. He later signed a rookie contract with the Panthers and has been on their active roster ever since.

In 2021, Hartsfield has appeared in one game and recorded two tackles and a pass deflection.