According to David Newton, the Panthers are in ongoing extension talks with RT Taylor Moton. 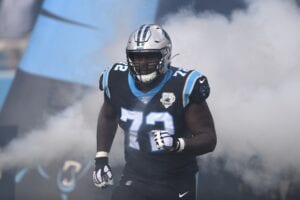 Newton says nothing is seen as imminent with Moton, who is one of Carolina’s top priorities for a new deal. He’s been the Panthers’ starting right tackle for the past two seasons.

“I have a lot of trust in my agent. I’m 100 percent focused on Taylor Moton being the best offensive tackle I can be,” Moton said.

In 2019, Moton started all 16 games for the Panthers at right tackle. Pro Football Focus rated him as the No. 17 tackle out of 82 qualifying players.

We’ll have more on Moton as the news is available.