According to Ian Rapoport, the Panthers have interviewed Colts WRs coach Mike Groh for their offensive coordinator opening. 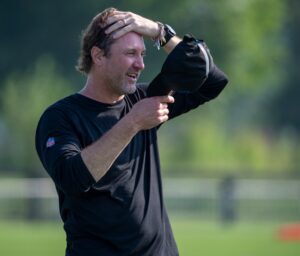 Carolina reportedly has interviewed Vikings OC Klint Kubiak and requested to meet with Texans QBs coach Pep Hamilton for the job while others such as former Texans HC Bill O’Brien, former Washington HC Jay Gruden and Rams OC Kevin O’Connell have come up as possibilities.

Groh, 50, began his coaching career with the Jets as an assistant back in 2000. He spent a number of years at Virginia before holding positions at Alabama and Louisville.

The Bears hired Groh as their WRs coach in 2013. After one with the Rams, Groh joined the Eagles as their WRs coach for the 2017 season before being promoted to offensive coordinator in 2018. Philadelphia elected to part ways with Groh and WR coach Carson Walch after both coaches drew criticism due to their units struggling through 2019.

He signed on with the Colts as their receivers coach back in February of 2020.